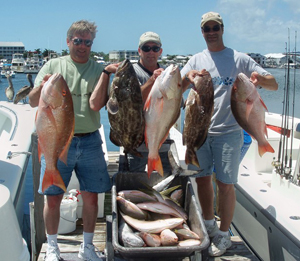 Since the winds have been blowing from the north lately, our charter captains have been leading charters to the Atlantic side of Key West. We've seen some success slow trolling with live bait along the edge of the reef. Today, we caught three Kingfish, ranging from twenty to forty-seven pounds using live Blue Runners and live Goggle Eyes.

Further deep sea, we continue to see some Sailfish. Recently, our captains have been guiding our Deep Sea Charters to fish for Blackfin Tuna near one hundred and fifty foot to two hundred and fifty foot deepwater wrecks. We've been cast netting in the grassy flats for live Pilchers and using this baitfish to chum and bait our lines to catch fifteen to thirty pound Tuna.

This week, the north winds should remain favorable for Deep Sea Fishing to the south of Key West. We'll also be for some Light Tackle action while free lining with live Pilchers for two to six pound Yellowtail Snappers. We've seen the most success by using twelve to fifteen pound test on light spinning rods.