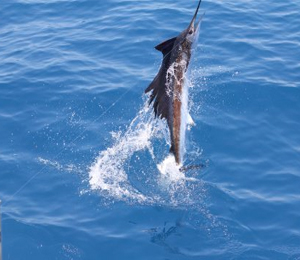 After some slow months off shore, we've seen the deep sea angling pick up. Captain Dan Smith recently piloted the Outcast into deeper waters of around 600 to 1,000 feet. Mahi Mahi has been found around floating oceanic debris. On his last expedition, Capt. Smith's clients hauled in three twenty-pounders. The appearance of the Dorado is a sure sign that deep sea fishing season off the coast of the Florida Keys has officially begun.

Closer to Key West, at a depth of around two hundred and fifty feet, our captains have seen ample action near the deep rock ledges. Using live bait and deep-water jigs, our charters have been hauling in Grouper, Mutton Snapper, as well as American Red Snapper.

Our anglers have been enjoying plenty of light tackle charters throughout the summer. Tarpon have still been active in the harbor. Sharks are still swarming the saltwater flats. Varieties of Snapper have been spawning at the Atlantic reef.