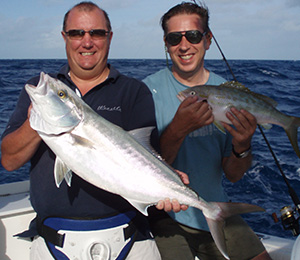 The Almaco Jack is also fondly known as horse eye bonito, songoro, and bonito, is a fish that is a part of the Carangidae family. Its scientific name is Seriola rivoliana, and it is one of the most popular fish in the Pacific Ocean. The appearance of the fish is similar to that of the Yellowtail and Amberjack fish. Its body is quite flat, and not very elongated. The dorsal and anal fins extend out prominently and have a distinct crescent shape. Compared to other fish within the species, the dorsal fins are far more elongated, making this fish quite easy to distinguish among its counterparts. In terms of color, the fish is usually brown or olive colored, while the underbelly is white with a brassy reflection. The color of the fin can be either dark brown or a dark greenish color. These fish also do not grow very large, as they only reach anywhere between 90 centimeters and 160 centimeters. The weight however can be quite high, as they can get to be as heavy as 130 pounds. Other interesting qualities about this fish are the strength and stamina that they exhibit. These qualities are what make fishing this creature so alluring, as the challenge is always attractive.

This fish is not concentrated in one particular area, but is found worldwide. Due to the flow of tropical and subtropical waters, you will usually find this fish frequents the east coast of most continents. In addition, another popular habitat is Key West fishing areas due to the water temperature. The fish typically concentrates itself among small groups, making a habitat on slopes and reefs. When it comes to water depth, the fish prefers to make an habitat in deep open waters rather than near the shore. However, when the fish is young, it will locate to reefs until it is able to sustain itself in open waters for survival. The habitat of this fish tends to proliferate with Almaco Jack fish throughout the spring and summer months and decreasing as winter approaches. One thing that many fishers must take into consideration when catching this fish is that it is imperative to avoid catching it near coral reefs. Those that are found near coral reefs may cause ciguatera poisoning, which irritates the stomach and can also be fatal. Therefore, when fishing, stay near open waters.

When it comes to feeding patterns, this fish is a predator. Its superior swimming capabilities and stamina allow it to overcome other fish and truly preserve itself and the pack in its habitat. There is no particular feeding pattern for this fish. It will feed either day or night, preferring small fish, quid, and invertebrates. Because it is a predator fish, it is able to avoid many of the dangers that target other fish of its kind. The benefit of fishing Key West is that this fish is able to span abundantly, making it a prime piece of fish for fishers. However, it should be noted that due to its strength and stamina, it is also one of the most difficult types of fish to catch.

Catching the Almaco Jack in the area can be quite a challenge, but it is one that is well worth it. Most consumers of this fish have not only prized it for its beauty, but also for its palatability. The best time of the year to attempt catching this fish is through the spring and fall months in deep waters. The main type of bait that most fishers prefer for this fish are artificial lures or jigs. For a more traditional fishing approach, it is best to use bait such as herring, squid, whole sardines, or whole anchovies. Lastly, to increase the likelihood of catching this fish, bucktails and diamond jigs are great tools for attracting the fish. When you finally do feel one tugging, it is best to hold strong, as it will put up a fight.