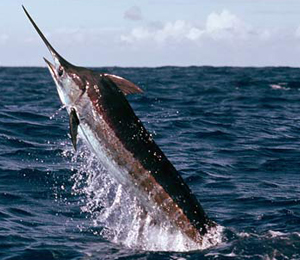 You can’t call yourself a real fisherman until – and if – you land a blue marlin.

These are the fish from which legends come.

Blue marlin are perhaps some of the most beautiful of deep sea water fish. They’re one of the largest of Atlantic marlins and are – truthfully – some of the largest fish found anywhere in the world. Females – which are much larger than their male counterparts – can reach 14 feet in length and can weigh – are you ready? – almost one ton!

The average size of a Blue marlin tends to hover around 11 feet in length and 200 to 400 pounds. Even landing one of these (relatively “petite”) blue marlins will still make your arms and shoulders ache – and provide you with one of the greatest thrills of your life!

The Atlantic Ocean offshore from Key West is a great hunting ground for these beautiful fish, as the blue marlin thrives in temperate waters such as those found here. The most striking of all fish, their blue color and that long – and potentially deadly – spear-shaped upper jaw makes them one of the most recognizable of fish around the world.

Blue marlin are known as blue-water fish because they spend a good portion of their lives far out at sea. They also migrate considerably and are known to follow warm or tropical ocean currents for hundreds or even thousands of miles

While they thrive in vast oceans, they also tend to swim near the surface, where the water is warmer. They’ll feast on tuna and mackerel but have been known to dive into deeper water in order to spear squid.

These fish are exceptionally fast swimmers – they are among the fastest of fish on the planet – and will use those snout spears to slash through dense schools of fish.

Blue marlin are exceptionally strong fish and are famous for putting up an incredible and long fight when hooked on a line. You will work for your prize.

When it comes to bait, the blue marlin prefers hooked bait instead of lures. Why? It will smell its likely meal and will come rushing! Since the blue marlin is large, your bait will need to be relatively large, as well. The types of fish the blue marlin likes (in addition to those mentioned above) and which could potentially be used as bait are flying fish, skipjacks, Spanish mackerel, mullet, and cero. If you prefer not to catch the blue marlin’s bait yourself, you could purchase frozen bait.

Blue Marlin Fishing Charters in Key West While it prefers live bait, the blue marlin does go after artificial bait such as softheads and konas. But it’s important that the bait look alive – and tasty!

As for your fishing tools, you’re going to need the strongest you can find and afford. You’ll need a stand-up class rod, and make sure it’s thick enough to endure a large amount of time and tension. The rod shouldn’t be longer than six feet or shorter than five. Your reel should have a proven drag and make sure you have at least 400-600 feet of line available.

You’ll need to harness yourself to the boat.

You may want to consider doing some upper body, leg and back exercises in advance of your Key West blue marlin fishing charter so that you’ll be in fighting shape for your ocean duel with this magnificent creature.