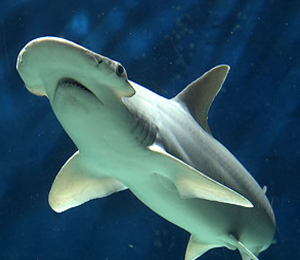 The bonnethead shark is actually kind of cute. It’s the smallest of the hammerhead-like sharks, and has a more rounded head than its larger cousins. It’s a timid shark – larger sharks have been known to prey upon it – and so it hangs around near coral reefs (possibly also for protection from the aforementioned larger sharks!).

Just about three to five feet in size, these sharks will swim in small groups of about 5-15 other lemon sharks. It’s in constant motion as it will sink if it stops because hammerheads are what are known as the “most negatively buoyant” of ocean vertebrates. The bonnethead tends to eat mostly crustaceans such as blue crabs, mollusks, shrimp and some small fish.