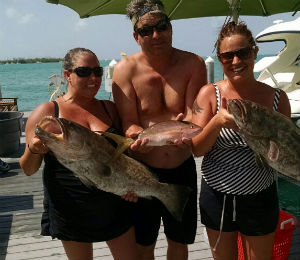 Yet another week has passed by that has provided us in Key West with even more amazing catches of all different types of fish. The fishing that has been taking place this Fall season on each of our charters is already looking to be just as eventful as the unforgettable Summer season. This week, in particular, hosted a fantastic haul by one group that spanned a couple of different species of fish. Samantha, Jorge and Amelia, all visiting from Pompano Beach, FL, reeled in several fishes of note. Samantha and Amelia both caught massive Groupers that weighed in at around 40 pounds, while Jorge dragged in a delightful snapper that weighed nearly six pounds. With this bountiful catch, this group sealed their placement as our Key West Catch of the Week.

The enchanting Yellowtail Snapper is a species of fish that resides most often within the waters of the Atlantic Ocean, particularly around Key West and parts of the Caribbean Sea. They like to swim among reefs and can be more readily caught in these locations. As they occur at any depths between 20 and 225 ft., trying to catch one becomes much simpler when Key West deep sea fishing, which our fishing charters provide easy access to. The Yellowtail Snapper, as the name implies, is identifiable due to its split tail, which is strikingly yellow in stark comparison to the bluish-grey tones of the rest of its body. They can often be found feeding on shrimp and small crabs, as well as worms. This species of fish is one of the lighter ones in Key West, with a maximum size of just under nine pounds. As such, the six pound catch by Jorge was definitely a notable one.

When looking at Grouper, these fish are also commonly spotted among anglers participating in some Key West deep sea fishing. These fish are notable because of their larger mouths and the fact that there are many different species of them throughout the world. The one found in the Atlantic Ocean, and in particular Key West, is known as the Black Grouper. While Black Grouper can grow to around 90 pounds at the most, they are more often caught at 10-50 pounds, making the catch of two 40 pound Groupers by Amelia and Samantha all the more spectacular.

Grouper are fond of warmer waters, something that Key West has facilitated as of late, making for a slightly easier time for spotting these amazing fish. As most Groupers consist of fatter bodies, they do not swim all too fast once hooked, which can help when you're attempting to reel a rather heavy one in. If you're looking to experience some unforgettable Key West deep sea fishing, our fishing charters offer everything that you need to catch a fish or two on an outing. Who knows, you may bring in a catch worthy of the Key West Catch of the Week, a fantastic tradition that Samantha, Jorge and Amelia are now a part of.