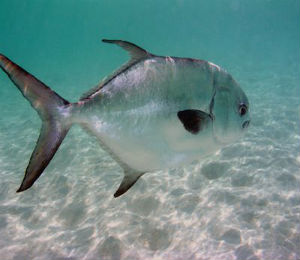 Every spring on the Florida Panhandle, those who love fine salt water fishing in Key West look forward with anticipation to trying to catch the legendary Florida Pompano. Sometimes called the Cobblerfish, the Pompano is so numerous in the Florida area that the city of Pompano is named after the fish.

Most Pompano are grayish in color with silver shading on the side, are yellowish underneath and have a bluish tint around the eyes. They range in size between two and five pounds, although there have been some unusually large specimens captured that are almost seven pounds. They spawn in the Gulf and feed on fleas, small fish and shrimp.

Because Pompano have small mouths, it is best to use baits and hooks that are also small. Live bait is best, but bits of shrimp will work as well. They may also respond to certain lures. Since they move away from shore in the winter, it is hard to catch them during that season. During the late spring, summer and early fall they are prominent in coastal areas in the Gulf, although it can be trick to find their exact location.

The biggest challenge in fishing for Pompano is finding them. If you're lucky, you will encounter other fishermen who can tell you where they are. Otherwise, you will have to try to spook the schools into revealing themselves by running your boat randomly along the beaches. One advantage is that Pompano engage in "skipping," which is the act of jumping across the waves just enough to briefly come to the surface. Since few other fish species in Florida exhibit this kind of behavior, to witness it is to be certain that you have discovered a school of Pompano. Once you know where they are, catching the limit is almost guaranteed.

As with any other fish, successfully catching Pompano requires using the proper bait. The best results are almost always gotten by using live bait, especially the frisky mole crab, which is also called the sand flea. Most bait shops along the Florida coast will sell them, although you can certainly catch your own with a sand flea rake. Don't put the sand fleas in a bucket, or they will die in their own urine. Instead, use an oyster bag lined with newspapers and a little ice.

If you can't find any sand fleas and there are none for sale, you can still catch Pompano using other forms of bait. Live shrimp and Fiddler crabs are also effective, but have the disadvantage of attracting other fish such as trout. Pompano will respond to the use of jigs, provided the hopping resembles the movement of sand fleas jumping. It helps to have an orange bead on it, as this is the color of the flea's egg sack. Pompano search for food primarily by sight, as evidenced by their large eyes. You might also try using artificial lures. Choose one that is about the size of a sand flea and with a spot of orange on it.

Pompano seek out troughs and drop offs because these holes in the watery terrain tend to fill with food. The trick is to be there when the fish are, which may require some patience. High tide with a good current will often bring out the Pompano schools, because the current brings fresh food into their feeding areas. If there are lots of granite boulders along the inlets, those are often the prime spots where shrimp and crabs congregate. Feeding is usually best when the water surface temperature is around 68 degrees.

Florida Pompano is one of the best eating fish there are, but if you don't intend to eat what you catch, consider releasing them, as in recent years the stocks of Pompano have declined. Florida Pompano fishing in Key West is always fun, so good luck!