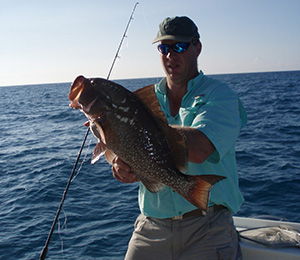 Red grouper is scientifically known as Epinephelus morio. It is native to the Southern Hemisphere, and is especially abundant in the waters of Brazil, Cuba, and Key West, particularly during the months of May through December. Overall though, it is an especially prominent Key West Fish. Compared to other Key West fish, it is moderate in size, as it typically grows to be at most 4 feet, with an average weight of 15 pounds. They are bottom dwelling fish, meaning that they dwell at the bottom of seas or lakes. As evident from the name, the fish has a light brown or dull red tint. Their eyes are large, and their pelvic fins are shorter than their pectoral fins. Due to the similar features that red grouper shares with many other fish, it can often be difficult to distinguish. However, the main method to distinguish this fish from others is to seek a large dorsal fin and the lack of a notch on the interspineuos membrane, which is the skin between the spin and the dorsal fin, which is the protruding fin located on most fish.

It is a non-migratory fish, meaning that it maintains the same habitat year-round. This fish is distributed along the Western and Southern Hemispheres, settling in the Atlantic Ocean on the East Coast of most countries. Grouper's dominant habitat is murky waters with rocky bottoms. The younger the grouper is though, the more the habitat can vary. Young fish congregate in seagrass beds that are located in shallow waters. Once they grow older, they can be found in rocky waters and reef habitats. In terms of water type, the fish can be found in both saline waters and fresh water, making it an especially adaptive fish.

As the fish is part of the Serranidae family, its feeding patterns are quite similar. Like its other family counterparts, is a carnivore. Due to its strength, size, and qualities, the fish is at the top of the food hierarchy in its habitat, meaning that it usually will prey on other habitat members. The fish's diet varies, as it feeds on shrimp, crab, krill, and spiny lobster. While it is the hunter of its habitat that does not mean that there are no other factors that affect its ability to survive and sustain a large community. The main threat to the fish is red tide. Red tide is the proliferation of algal bloom in large concentrations, and it is toxic to the species.

How to Catch Them Key West

While the habitat for the fish varies, Key West is an area where it prospers year-round, making it an especially prominent Key West fish. However, while this may help your chances of catching this fish, there are other tips that one needs to keep in mind in order to have a successful fishing trip. Red grouper tend to enjoy warm waters that reach up to 77 degrees, so it is best to find an area where water temperatures are quite warm. The water depth should be about 400 feet, near shallow water reefs or open waters. The largest catches, however, can be mainly found offshore. Due to the water conditions and fishing hours, it is best to fish immediately after high-tide, as they are typically in abundance at that time. Considering the feeding batters, the most successful fishers use bait such as shrimp, crab, and octopus. To cut down on fishing costs, you can also try using alternative shrimp and crab. Once you have your bait, you can begin fishing. Lastly though, one consideration that you might want to make is to use heavy tackle and bottom bouncers. Fishing regulations vary by area, and it is best to ask your local Key West fishing area whether or not a certain item is prohibited.