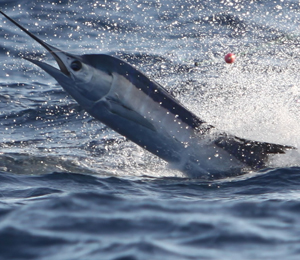 About as well known – but not quite as pretty – as their gorgeous cousin the blue marlin, sailfish are the fastest fish in the sea.

Sailfish are found throughout the warmer and more temperate of the Earth’s oceans. They are a bluish-grey in color and have white underbellies. Their name comes from a dorsal fin that extends almost the length of their body. That dorsal fin also is much higher than the fish’s body is thick.

Like the blue marlin, sailfish have a long upper jaw that extends out much farther than their lower jaw. The upper jaw is shaped like a spear.

Unlike the blue marlin, the sailfish likes smaller fish such as sardines and anchovies. They’re often found pursuing large schools of these fish, using their dorsal “sail” to “shepherd” their prey. They also eat octopus and squid.

The meat of a sailfish is rather tough, so they’re not fished so much for meat but rather for sport. They can weigh up to 220 pounds and can grow to as long as 10 feet in length.

Patience is needed when fishing for sailfish: their strength and determination can mean it can take hours to land one when hooked.

As for bait, sailfish will take on ballyhoo and it’s best if the bait is live. You can purchase the bait from a bait shop, or fish for it yourself (ballyhoo tend to congregate near patch reefs).

Sailfish prefer clear water, so as you head out to sea, keep your eye peeled for the clarity of the water. You’ll want to be at depths between 60-180 feet. Sailfish also congregate around wrecks.

You’ll want to troll slowly. You might even consider just drifting if you think sailfish are nearby. Set your clip tension very loose and keep the bait runner reel in a position that allows you to let out your line freely with little tension. A sailfish will hit the bait with that long bill as it tries to kill the bait (sailfish like to come back to eat it). Be careful: tension on your line or bait that looks “unnatural” can put off the sailfish.

Hiring a Key West sailfish charter can be one of the most exciting events of your life, particularly if you hook one of these magnificent creatures. Sailfish can – and often do – go airborne as they try to get unhooked from your line. It’s a sight you won’t soon forget and you’ll rightly feel quite proud when you reel in and land the fish!