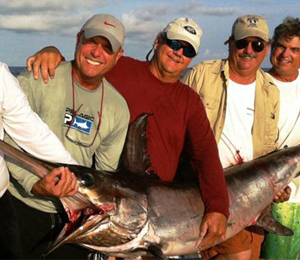 One of the most-prized trophies of tropical waters is the Swordfish. Adults usually measure about 9.5 feet in length, and the record weight for a rod-and-reel catch stands at 1,182 for a fish taken in Chilean waters. These fish reach maturity at about 4 - 5 years, which is when their rows of sharp teeth disappear, but their lethal bill is still a force to be reckoned with. They use it not as a spear, which is a common misconception, but to slash and fatally disable their prey. They can live up to nine years, which is considered to be a long life cycle for a fish. Experienced fishermen can gauge their age by counting the rings on their fin.

Sport fishermen spend many an hour upon the water dreaming of the day they reel in their first swordfish, and the reasons for that are many. Aficionados of Key West fishing who like a challenge will enjoy attempting to reel in this wily Billfish. Often found at depths of about 1,800 feet, this fish is both elusive and fast, having been clocked at speeds of 60 mph. They typically like deep, cooler waters where the temperatures range from 64 - 74 degrees Fahrenheit. Like some species of shark, tuna and marlin, these fish areectothermic. To stay alive and active at such depths, they depend on a special organ located near their eyes that provide warmth to the eyes and brain.

These are highly migratory fish, and in the warm Key West waters, they will spawn year round. A female can carry almost 30 million eggs. You will sometimes see them breaching the surface of the water in great leaping arcs. it is thought they may be trying to rid themselves of parasites like remoras when they do this.

These fish are definitely more the predator than the prey; man is their greatest adversary, although occasionally a mako shark or killer whale will take one on. Swordfish dine on an ocean cuisine that includes crustaceans, mackeral, squid, herring and lanternfish, depending upon the waters. They do not school like some species of fish and may hunt in a loose aggregate with 30' between them and another fish. They usually feed twice a day but prefer the nighttime when they rise up to just 100 - 300 feet below the water surface.

Any fisherman preparing to take on this fish species should arm himself with a very strong rod and reel and be ready to strap himself in for what may turn into an hours-long fight to get his prize to the surface. During the day when the fish are down in the depths, it's easier to bait and use an electric reel to save time and effort while checking baits. At night when they rise to feed, a hand-cranked reel works fine in most cases. Squid will often get you a nibble; as will mackerel, mullet, herring and bonito bellies. It doesn't hurt to attach a glow light to the bait to attract the big fish.

Catching these cagey fish is one of the highlights of Key West fishing. While charter boat captains usually are aware of several hotbeds of activity, these fish remain an elusive catch and are highly prized for their trophy value as well as for their meat. When all is said and done, however, a day or night spent out on the ocean off of Key West is time well spent.