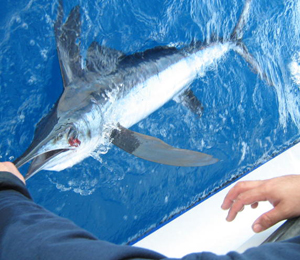 Similar in beauty to their cousins, the blue marlin, white marlin are one of the most prized of catches among sport fishermen.

The white marlin is known for its distinctive, spear-like upper jaw (one that’s more than twice as long as its bottom jaw) and for its tall, fan-shaped dorsal fin, which runs almost the entire length of its body.

The white marlin tends to be very light in color (hence its name). It’s also one of the smaller of the bill fishes, with a maximum length of 9.2 feet and a maximum weight of about 180 pounds. Most white marlin, however, tend to be 4.25 feet to a tad shorter than 7 feet in length.

It also differs from other marlin in that its dorsal fins tend to be rounded rather than pointed.

The best bait to use on a Key West white marlin fishing charter are mackerel, herring, ballyhoo, bonefish, anchovies, and squid. They also can be caught with artificial lures such as small spoons and feathers

They often hang out near fronts – edges between water bodies that differ in temperature or salinity (such confluences produce nutrient-rich upwellings, which draw baitfish).

Blue Marlin Fishing Charters in Key WestYou’ll want to be sure you wear protection on your hands and possibly on your arms – that jaw looks like a spear and marlin use it as such – they are believed to use their jaws to harpoon small fish.

White marlin are furious fighters when hooked. They “tail walk” on the water and make fantastic leaps in the air, which is one reason why Marlin fishing in Key West is so popular. You also may want to attach yourself to the boat securely, just in case. In other words, be careful!

This also applies when you actually land the fish in the boat: that bill is very rough and can do some serious damage. Pay careful attention and wear protection.