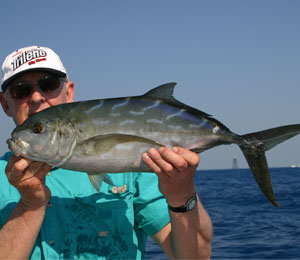 One species of fish you'll likely encounter when you fish Key West is the Yellow Jack (Carangoides bartholomaei). Sometimes also known as the coolihoo, it is a species of offshore marine fish belonging to the jack family--a genus of fast-swimming predatory fish including the pompanos and the jack mackerel, along with the yellow--which hunt above reefs and in the open water. It can be found in offshore waters throughout the tropical and sub-tropical western Atlantic from Massachusetts to Brazil and around many Caribbean islands, is one of only two members of the jack family to live in the Atlantic Ocean.

It generally hunts individually or in small schools, in open water or above offshore reefs, however occasionally venturing into shallower reefs to hunt smaller species. The jack feeds off smaller fish, such as yellowtail snapper and parrotfish, and have also been known to live in close relation with spinner dophins, feeding off the dolphins' waste products. It has also sometimes been observed in a "following role," which means moving with a larger species, and hunting and scavenging amidst the chaos created by the larger fish. This is an important characteristic for fishing: while it is not typically the targeted fish by a charter-boat, it is often a very nice "also-swam" prize.

And it can be quite the consolation. The yellow jack is a large fish, growing up to a yard in length and weighing thirty pounds (although typically caught more in the fifteen-twenty pound range), making it an excellent trophy fish. It is also generally known as a decent table fish, considered a good-tasting fish and sold both fresh and salted--although it has also been classified as high-risk, due to its confirmation as a ciguatera carrier. The jack was the first species outside the Pacific Ocean to be implicated in ciguatera poisoning. Because of its speed, it makes for an exciting game fish, taking the hook and running with the line, and it is a muscular fish, offering a good fight once the reeling begins.

It has a typical jack shape, moderate-to-large, compressed and elongated, with a yellow-green-blue coloring dorsally and a silver underside. Juveniles have five vertical bands which fade as the fish matures, while older jacks tend to be more yellow, with the biggest specimens displaying bright yellow fins.

It can be fished by seines, trolls, and hook and lines, and are often caught by recreational fishermen trolling for larger species. However, no one is ever disappointed to hook a one, as it is one of the best fighting fish around. Powerful, quick and agile, it will put up a fight and look gorgeous doing it. They are such good fighters that, while you fish Key West, you may go after a jack specifically. They will typically hit at any bait, and fight once they do. So while everyone is after a marlin to stuff and put over their mantel--which, of course, anyone out to fish Key West would love to catch--be happy to hook a twenty-five pound yellow jack on the line any day of the week. Now that is good fishing!