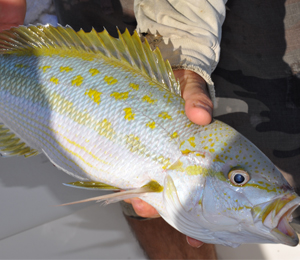 This time of year, the Mangrove Snapper spawn is at its peak at the Atlantic reef. Every evening during July we guide charters south to the reef in the late afternoon to fish until around ten or eleven pm. These four to seven pound game fish are especially active in the moonlight. In addition to Mangrove Snapper, our clients have been nabbing Grouper, as well as Yellowtail and Mutton Snapper.

The light tackle fishing is excellent at this point in the summer. The Tarpon have continued to be active in Key West Harbor, while Lemon Sharks, Blacktip Reef Sharks, and Bull Sharks are extremely active in the saltwater flats.

Yesterday, on our charter vessel, the Coolwater, Capt. Bill led a successful charter out to a wreck in two hundred and twenty feet of water. Bill used sand balls as bait to help his party catch six American Red Snapper weighing up to twenty pounds. Sand balls are a mix of sand and chum that the Snapper can't resist.