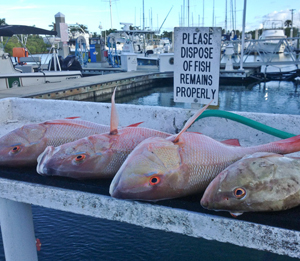 If you are interested in some light tackle action, this is a great time to visit us down here in Key West. Just off the reef on the Atlantic side of the island, the Mutton Snapper spawn has hit its peak. Our charters have been heading out to the reef every afternoon around 3pm and fish until 9 pm. Dan Smith skippered our boat, the Outcast, to the reef last night; his clients caught ten of these fighting game fish. Two nights ago, our own Damon Santelli guided the Coolcast for a successful charter on the reef; his group nabbed twenty-one Mutton Snapper. Not only are these fish great battlers, but they are also extremely tasty. If you would rather go angling during the daytime, the Yellowtail Snapper have been biting well at the reef during daylight hours.

In Key West Harbor, the Tarpon keep hitting the cut bait hard. Monday, our own Bill Wallace took a group out aboard the Coolwater for a four-hour tour and they caught five out of eight Tarpon.

Out past the reef in the deep water, we've still been catching Mahi Mahi as well as a few Blackfin Tuna. There was a single day Mahi tourney held in Key West this past weekend and the top catch was a 61-pounder.